How to build Assassin season 6 DTCL


Assassins go up and down in many updates but are always present in the meta game of DTCL. Season 6 is the same when the Assassins have received the return of familiar assassins such as Talon, Katarina, Shaco DTCL and Akali DTCL.

These used to be the carry in many Assassin squads from season 1 to the present. Katarina and Akali once exploded in season 1, season 4. Shaco once attracted attention in season 3, Talon season 4. Along with that, Ekko used to freeze opponents in season 3.

Obviously, although very weak, the Assassins are always prioritized in terms of damage. Fast close, shock damage to the opponent, especially the back row generals are always weak health champions. However, the Assassins must also have a reasonable combination to have enough time to deal damage to the enemy team. If you want to know how Assassins season 6 works, check out the article below.

Still the familiar buff that jumps to the back and the skill to increase the rate of critical damage. The Assassins’ health is quite low, it can be said to be the lowest among other clans in the Arena of Truth season 6.

So the Assassins will need to combine with the tanks in the team so that the tankers can keep the opponent long for the Assassin to deal their damage. Currently, Assassins combine a lot with the DTCL Gang, Braum and Darius will be tankers in the Assassin team. 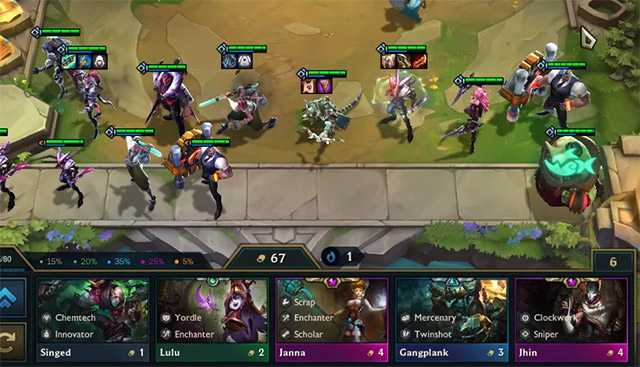 Shaco is the champion who will be the earliest pawn in the Assassin squad if he is on the ring because this guy is the mainstay in the team. Then there’s Akali, but she’s a 5 gold champion, so she’ll appear a bit late. All defenses will go to all the main tankers in the team.

How to build Assassin season 6 DTCL

Start with Assassins, and of course you can’t just take Assassins without needing to combine with other champions. You can get Twitch and Warwick, Singed to get Chemistry. Thus, the defense will be resistant enough in the early game. Go to level 5 if you’re on a winning streak and add damage or resistance depending on what you need.

In the middle of the game go to level 6 in round 3-2 and gather all the strongest you can. Most importantly, get 4 Assassins and get 3 more Gangs to buff Shaco. Before replacing Darius, you should find him at 2 stars and put him in the queue. 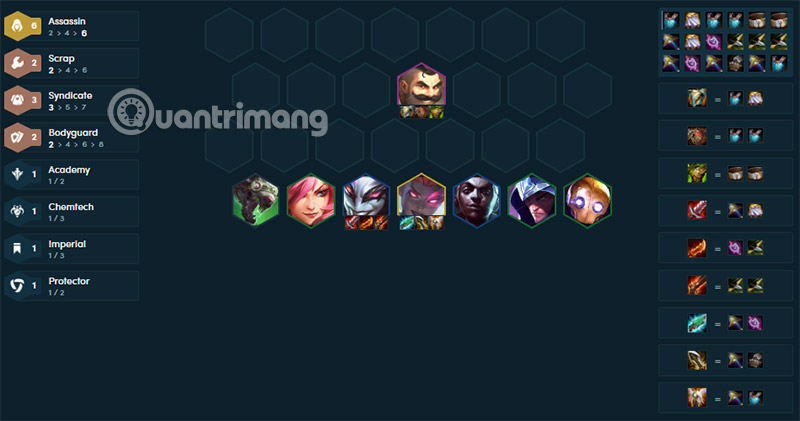 Level 7 in round 4-1 and try to add Braum, keep saving money to 8 and find Akali. You can pick up 6 Assassins if you can’t find a buff in Tech Core. At this point you can still hope for Braum and Blitzcrank to pull champions and absorb damage. Enough items, enough stars, hit 6 landmarks, the damage of the Assassins will be very strong. 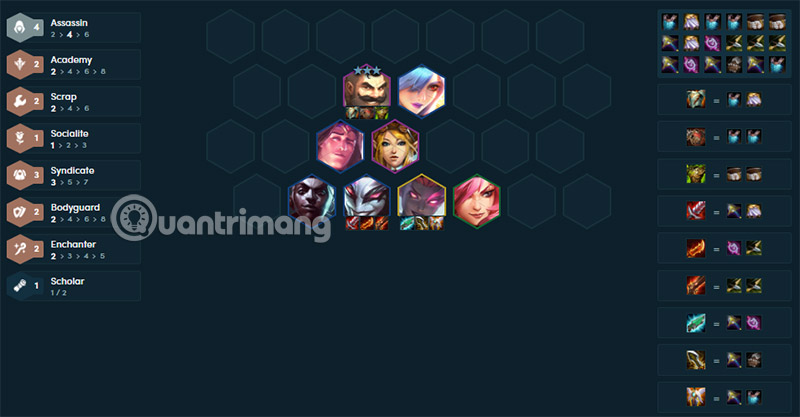 And in case you can hit Assassin thanks to Tech Upgrade, add other support champions in the team. The example above you can remove the Assassins and add Taric and Janna to heal Braum and Leona.

Assassins will receive support from Wizards, Idols and Gangs. You can also choose to click the Gang buff so that both Shaco and Akali receive the 5 Gang buff in this team. 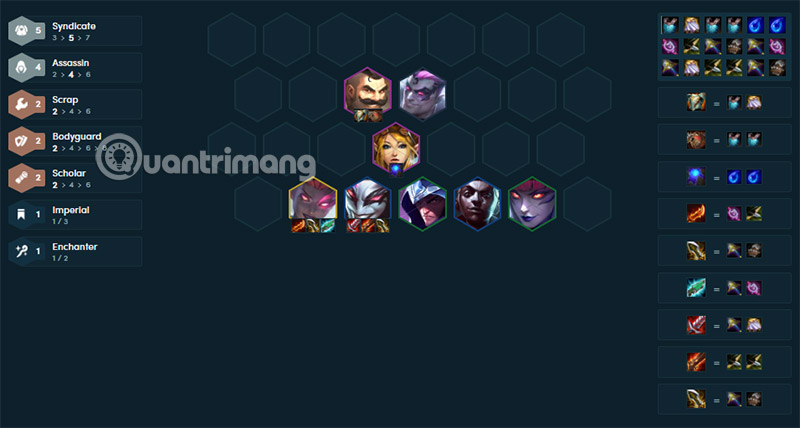 Or you can go up to 5 Gangs and 4 Assassins if you can hit the Assassin buff to 6 thanks to Tech Core. This way, the entire Gang will be buffed and they will have longer standing time on the floor.

You will see a lot of Infinity Swords in this squad, any assassin will be suitable for Infinity Sword so you can get a lot of BF Swords > Practice Gloves.

However, besides this item, Assassin generals will also need more than that. Usually the key positions will be Leblanc, Nocturne, Diana and Katarina. Katarina and Leblanc’s equipment is the same, so you can give both Blue Charm, Infinity Sword, Angel Armor. Diana will need more Frostheart for better crowd control and Nocturne will need Rage Blade for her ability’s special effects.

Viego will need more Alchemy Cloak and Angel Armor, and Kha’Zix is ​​not that important because just a champion that deals damage in the middle of the game has other champions to replace it. 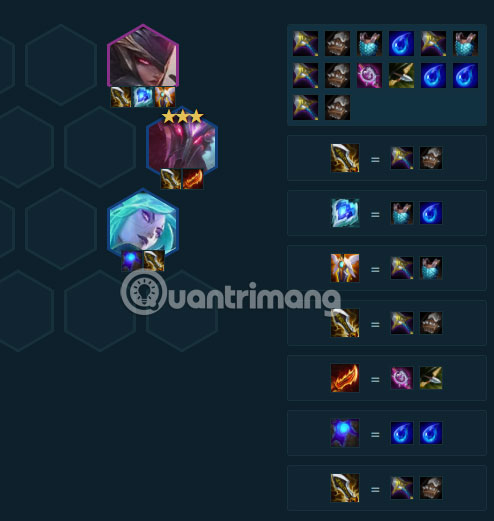 Leblanc in this Assassin squad will be the main carry and you can perfect her in the mid game. Then find other Assassins like Katarina and Nocturne 3 stars to increase the damage to the squad at level 7. Volibear and Ivern and Morgana will be the top control and tank champions.

And if you want to increase Diana’s buffs, you can build up to 4 Sorcerers. Although she is a bit short on tank, Diana will stay longer on the field to deal damage to the enemy team. And Leblanc will be stronger when there are 3 Dark Elves.

6 Assassins can combine with 2 other champions to create a late game lineup, can combine Volibear with Warwick to create 2 Resist Gladiators and increase Volibear’s health. Or you can combine Darius/Garen – Thresh, Sejuani – Hecarim to add defense.

Regardless of the formation, the Assassin is only strong from milestone 4 or higher, the combination of defense at this buff milestone is simpler than 6 Assassins. A level of buff capable of massive shock damage but not very necessary.