How to switch from Insider builds to Stable of Windows 11


If you are participating in the Windows Insider Program for Windows 11, and want to switch from Beta or Release Preview channels to a stable build in your next upgrade, how?

Basically, if you plan to use the stable version of Windows 11 when the operating system officially launches on October 5, while you are using the Beta or Release Preview channels (not applicable to the Dev), the conversion is generally quite simple. Just flip a switch in the Windows Settings app, and your Windows Insider Program subscription will be canceled at the next major stable release. The same will apply after Microsoft fully releases Windows 11, but you may need to wait until a major update to switch automatically. Otherwise, you’ll still be on Windows 11’s Beta or Preview Release channels.

To get started, first open Windows Settings by pressing the key combination Windows + i. Or you can open the Start menu, search for the keyword “Settings” and click the corresponding Settings application icon that returns.

In the Settings interface, click on the “Windows Update” in the list on the right, then select “Windows Insider Program“.

In the Windows Insider Program settings screen, click on the “Stop getting preview builds“. Next, toggle the switch next to the “Unenroll this device when the next version of Windows releases“to state”On“. 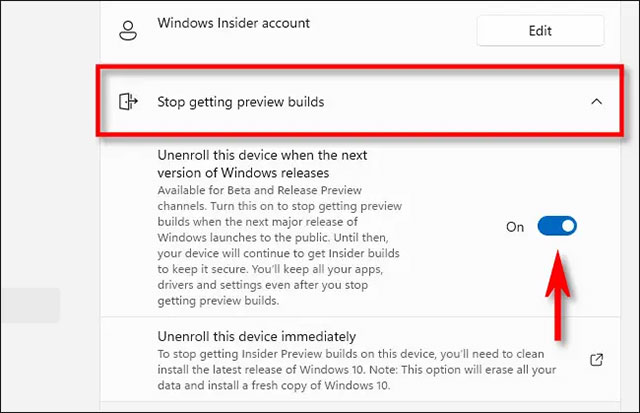 Then close Settings and the next time Microsoft releases a major, stable update for Windows 11, your PC will automatically leave the Insider program and switch to the regular stable version.

Alternatively, you can also change your Windows Insider settings on this same screen, if you want to switch between Dev, Beta, and Release Preview channels. Good luck!

Refer to this guide if you haven’t installed Windows 11, or are looking for ways to use Windows 11 more efficiently.

How to black out rows in Excel with quick keyboard shortcuts