Kai’Sa in this list of DTCL 6 generals has returned with the mission of a Mutant – Challenger. Along with Veigar, her skill is considered the simplest in the list of 5 gold champions.

But if you have the right equipment and go with other champions properly, Kai’Sa will help you deal great damage late in the game and be extremely annoying to the enemy team. So what does Kai’Sa need and what will she do to get the most out of the Teamfight Tactics season 6, you can refer to the content below.

Mutants can gain additional stats related to damage or mana, health and attack speed after each battle. These stats are subject to change, so Kai’Sa will receive different stats. And if enough Challenge, Kai’Sa will discharge rockets like 6 barrels. 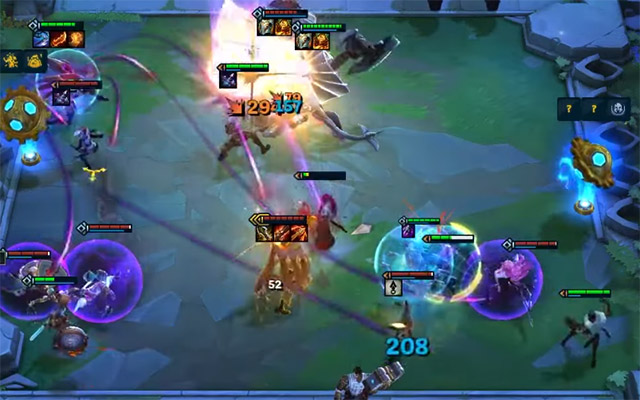 You should pick up the Training Gloves > Wooden Bow > BF Sword > Oversized Stick for Kai’Sa. In case you follow the Challenger, you can focus damage for Kai’Sa and leave the Rage Blade. The item holder for Kai’Sa can be either Quinn or Samira.

Although the clan system in Team 6 Challenger is not diverse, in return, the Challenger generals are all capable of dealing damage and adverse effects very well. Along with Kassadin and Mundo will be two tanker factors to help better withstand in the team. If the Hextech Fragment has a Challenge, you can choose to buff it to 8 or 6 Challenges and then add other champions to the team.

Gladiator will be the top tanker in this team, the link between Kai’Sa and other Gladiators will be Mundo. Cho’Gath and Catfish kill tanks while Zac and Warwick will support damage at the top. Seraphine stood in the corner doing the task of healing and supporting the attack speed for the tanks and Kai’Sa would do his thing.

5 Mutants will give powerful stats to the Mutants in the team. In this team, Cho’Gath and Galio will be the two generals who throw away the enemy team’s tanks. Mundo and Kassadin are still two tank support generals. Kai’Sa and Malzahar will stand in the back row and do their duty.

Kai’Sa doesn’t appear in the early game so you need to have a strong team and build a winning streak to get her in the late game. Things for Kai’sa are not difficult to find and there is no shortage of people who can hold them for her.

So if you want to see Kai’Sa perform in this season 6 DTCL, you can choose one of the above lineups to test. In the near future, there will be more Kai’sa lineups, the ad will update more for your reference.