One of the main reasons for the shortage of supply in the graphics card market over the past few months stems from the explosion in cryptocurrency mining, or roughly speaking, “mining”. This causes the price of GPUs to increase and it is difficult for the gaming community to access a source of new, quality gaming cards.

To stabilize the GPU market before the “storm” called “cryptocurrency mining”, the solution that many manufacturers are aiming for is to launch card models designed specifically for mining. However, it seems that coin miners are not really interested in this type of GPU. Because besides mining performance, another important aspect they care about is liquidity. Buying and selling GPU models that both support gaming and can mine coins is clearly much more profitable.

Nvidia has just officially launched the 12GB version of the GeForce RTX 2060 model, a mid-range GPU model that is very popular with both the gaming community and gamers. Despite bearing the name RTX 2060, the number of CUDA cores of this new GPU model is similar to that of the RTX 2060 SUPER, and also has 50% more VRAM than the previous best-selling 8GB model.

Therefore, the launch table of the RTX 2060 12GB has attracted a lot of attention from the coin player community, instead of targeting gamers as NVIDIA’s original purpose. And the actual assessment shows that the worries are completely justified.

Specifically, engineers from hardware site PCMarket have evaluated the mining performance of the new 12GB Zotac Twin Edge RTX 2060 variant. The results show that the 12GB RTX 2060 gives very good performance in virtual currency mining, if not the most effective compared to other models of the same price range at the moment. The graphics card model has an efficiency of 379.33kH/J, which is equivalent to mining with a hash rate of 31.65MH/s at a power consumption of 83.44W. Besides, 12GB VRAM is also a parameter that miners appreciate.

In terms of gaming, the 12GB RTX 2060 also performs as expected. Surprising even in extremely VRAM demanding situations, with the advantage of up to 12GB VRAM capacities. Example: Actual testing shows that the 12GB RTX 2060 can handle Far Cry 6 at 4K resolution with HD Textures On. But of course the experience is not really good. 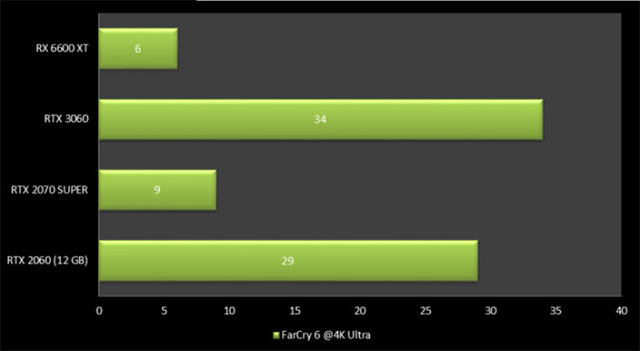 For now, it’s still quite early to talk about market trends for the GeForce RTX 2060 12GB. But in the context of the current situation of demand exceeding supply, the selling price to users is certainly not cheap, and it is also difficult to put this card model in the segment for gamers with a small budget. da.