In terms of skills of Orianna DTCL this season 6, it is clear that this is a skill that favors support, damage from Orianna’s skills compared to similar names like Jhin, Lux, Sion, Fiora, Urgot… cannot compete with each other.

In return, Orianna’s ability to stun will cause enemy champions to freeze for a period of time. At the same time when casting, she can also create shields for tanks so that they stand longer in the formation.

Machine increases attack speed, Wizard heals and increases shield, magic resistance, so Orianna is not the main carry, but still appears in many squads. If you want to see what Orianna can do, check out the content below.

The Machine helps Orianna restore mana and cast spells faster. The Wizard shields allies with magic resistance and shields, and heals himself. But the Wizard has up to 3 generals that heal himself and his allies, so this is a rich source of support for the team if there are enough faces.

The champion that deals damage or goes with Orianna DTCL season 6 is none other than Jhin because they are both Machines. Camille is also a good damage dealer in the early game, so this is also the name used to turn to the Machine team later.

In addition to supporting equipment such as the Cup of Strength, Zeke’s Flag, Orianna can have additional damage and control support equipment as below. Note Oversized Stick > Tears > Practice Gloves > BF Sword > Wooden Bow. 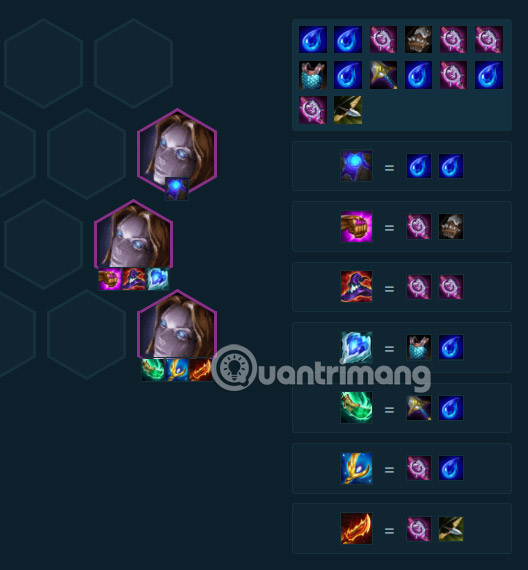 The activation system in this squad is small, but that’s enough. Tanker depends on Camille, Taric and Zilean and Jhin is the main main. Janna and Lulu help heal Orianna and Jhin. Miss Fortune is simply to activate the system and reduce the healing of enemy champions.

Jhin is still the main carry in this team but the team doesn’t focus on Machines and Wizards anymore. The Wizard is still at 3 with Orianna, Janna and Taric. Combine with team buffs like Guards, Scholars and Gunners to create a comprehensive squad.

Orianna in this lineup will support damage and control next to Jhin. Seraphine standing in the corner will deal damage and heal some members of the team. Caitlyn and Heimerdinger will supplement Jhin’s damage.

In addition to the above formations, Orianna can appear in any squad even though the Machine or Wizard buffs are very small. Basically, gamers will need her powerful control skills, even though she doesn’t have an abundant amount of health or shield to support the back row to deal damage like the Gladiator or Guardian generals, but with her skills. But Orianna can still make enemy carries spin without doing anything.