Malzahar seems to be a champion that only attacks the DTCL or Mutant Mage type next to the mainstays like Lux DTCL or Kai’Sa DTCL this season 6.

But when the main characters have not appeared, Malzahar is still a reliable choice for gamers. His skills among the mages are still quite strong, and if there are items and enough buffs, he is still the most prestigious mage. Not to mention he can bring

So what does Malzahar need and what should he do to be the best support in the team. You can check out some of the content below.

Malzahar gets an AP boost so he will increase his damage when he has enough Mage. As for Mutants, they often have different stats, but usually 5 Mutants will give more damage than healing and defense.

In the Mutant team, there will be more defensive champions, so Malzahar will do the main carry next to Kog’Maw because waiting for Kai’Sa is a bit long. Either way, Malzahar should save his items and try to roll Malzahar to 3 stars, the stronger it is.

Skill: Malzahar casts a spell on the nearest target, dealing 800/1100/1500 magic damage over 8 seconds and add 40% magic penetration. If the target dies, the spell will infect the last 1/1/2 of the un-cursed target.

Malzahar needs the most is the Oversized Stick > Tears > BF Sword > Training Gloves. Malzahar items can be transferred to Lux or Viktor if you see that the roll for Malzahar fails and you see more than one of the two champions. 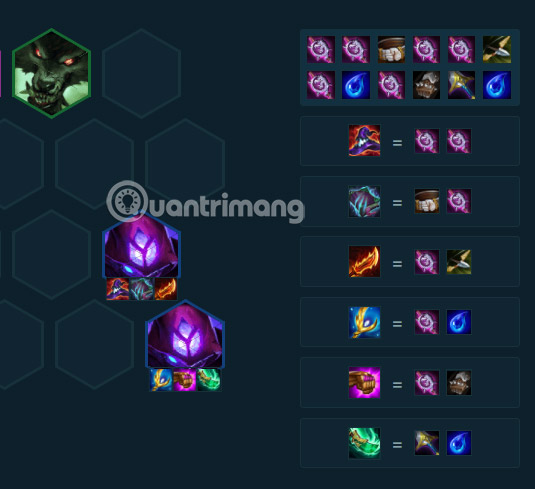 Lux and Malzahar will be the main source of damage, the team is a bit short of tanks, so your tank gear is all for Vex for her to do the resistance mission. Prioritize slow roll at level 7 to 3 stars for Malzahar, and for Lux, her position in this team is just a secondary carry.

Because of the lack of tankers, Janna will do the healing task for the team, and having her and Heimerdinger also helps the team recover mana a bit faster.

Kai’Sa, Viktor and Malzahar will be the main damage dealers in the team. Before the other three appear, Kog’Maw will be the champion that deals damage from the beginning to the middle of the game.

Tanker will include Mundo, Cho’Gath and Warwick, you can also replace Zac in Warwick’s place if you see him appear many times.

All in all, Malzahar is a versatile pick for both Mutant and Mage teams. He can wear and hold items to deal damage from the beginning of the mid game, and roll up stars is easier than Lux, Kai’Sa and Viktor so Malzahar is still a significant choice for the team even at 3 gold. Mutants and Mage.