The best jokes about men


Men like to have fun, Men are curious… are the best jokes about men. Invite readers to have moments of relaxation and comfort.

A guy was on his way home when a girl stopped him and asked:

He nodded in agreement. So she sold him a… comic book.

Men are the kings of curiosity

In a train car, there are 3 men and an extremely attractive young girl. The four of them engaged in a conversation, and after a while they changed to the… delicate topic.

The young girl suggested, “If each of you gives me a dollar, I will show you my feet.” The three men, mesmerized by this young woman, all pulled a dollar out of their pockets, and then the girl pulled up her skirts a little to show her legs.

Then she said, “If each of you gentlemen give me ten dollars, I will show you my thighs.”

Men are men, all three pull out a $10 bill. The girl pulled up her skirt very high, showing off her supermodel thighs.

The conversation continued, and the three men, somewhat drawn to the sexy woman, waited for more “hot” suggestions. The young girl said, “If you give me 100 dollars, I will show you where I had… my appendix.”

Naturally, all three gave money. Immediately, the girl turned to the window, pointed to a hospital in the distance and said: “There!”.

Men suffer all their lives just because of a toothpick 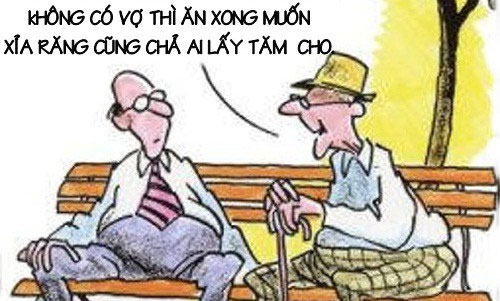 Seeing his son lying around all day refusing to get married, the father advised:

– I’m almost 40 now, get married or else I’ll finish my meal later, and I won’t have anyone to pick up a toothpick if I want to floss!

Forty years later, the young man that day, now an 80-year-old man, was lying with his head in his hands, with cotton stuffed in his ears. Around, the children played loud music, danced and played soccer in the outside room. He lamented quietly:

– Oh! Just because of a toothpick, my body is miserable like this!

– Hey, tell me, what score did you get today?

Which country’s men are easier to teach?

Three American, French, and Vietnamese women discuss how to educate their men.

“One day I told my husband that from tomorrow he has to cook for himself. The first day I saw nothing, the second day too, and on the third day I saw him take out the cookbook and start practicing.”

“I tested my husband by not cooking, the first day he complained a bit, the second day he rummaged through some pieces of cake in the fridge to finish it and on the third day he started to eat. Go to the supermarket to buy food and practice cooking”

As for the Vietnamese woman, … recounted:

The millionaire guy in a foreign country has 3 girlfriends but doesn’t know which one to marry. So he gave each of them $5,000 and watched how they spent.

– She first went to buy new clothes, did her hair, did her nails and said to him: I spend money to make you beautiful because I love you so much.

– The second girl buys him golf cards, CDs, and TVs: I spend money to buy these gifts for you because I love you very much.

– The third girl takes $5,000, invests it in stocks, doubles it, returns 5,000 to the guy and continues to invest the rest: I invest this money in our future because I love you so much.

– The first half of his life, he suffered from lack of money, after that… it would be much better.

– Because I will make money?

– No, because you will get used to it.

Because infertility is not inherited. Therefore, if you have children, they will not get this disease.