What is the udumbara flower, what is the special meaning that every time this flower appears, it attracts the attention of so many people. Please refer to the article below to learn more about this special flower.

What is the udumbara flower?

According to Buddhism, the Udumbara flower is a flower associated with Buddhist scriptures, a symbol of good omens, and a signal of the Holy King of Falun. When udumbara flowers appear, it means that Maitreya appears in the human world.

According to legend, udumbara flowers grow in the void, pure white, “not contaminated with dust” and bloom only once every 3,000 years. If you are lucky enough to see udumbara flowers in bloom, you will meet many good omens in life.

In recent years, Udumbara flowers are said to appear in many places such as China, France, Korea, America, Vietnam… They often appear in Buddha statues made of bronze, stone or steel bars, Leaves should attract the attention of many people. 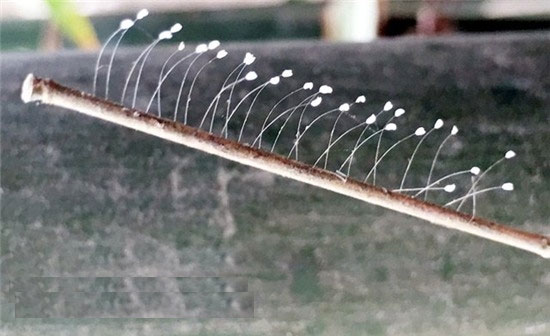 The truth about udumbara flowers

According to Professor of Science Doctor of Science Trinh Tam Kiet in the Department of Technology and Mushroom Roots, Institute of Microbiology and Biotechnology, in fact, what is believed to be udumbara flower is a slime fungus. This is a lower organism, with no tissue structure only. During the reproductive period, the plant will produce reproductive bodies that carry spores. The plant will bloom when the conditions are right.

Its flowers are shaped like a small bell with pure white color, slender and transparent stem. Petals are very small, folded like a fist. This flower usually grows in clusters and has a very pleasant scent.