Will the GPU selling price return to stable after Ethereum ends the mining cycle?


One of the main reasons for the shortage of supply in the graphics card market over the past several months stems from the explosion in cryptocurrency mining, or roughly speaking, “mining”. This causes the price of GPUs to increase and it is difficult for the gaming community to access a source of new, quality gaming cards.

In the world of Crypto miners, Ethereum is currently the most valuable coin, accounting for a large proportion of mining rigs, and is used as a measure of the mining performance of any GPU model. However. In fact, Ethereum has been planning to update Proof of Stake for quite some time now. However, it is not clear why this “bomb” has remained unexploded year after year.

In simple terms, after Proof of Stake, the difficulty in mining will increase significantly. This is the main reason why it is difficult for virtual currency mining to be as profitable as before, leading to a drastic shift in the behavior and general trends of miners. In particular, this will also have a fundamental effect on the overall price of GPUs.

However, the question is whether the GPU selling price will return to stable after Ethereum updates Proof of Stake? As assessed by experts in a recent blog post by the Ethereum platform, it seems that ETH is finally ready to move to version 2.0. This makes many people, most of which are gamers, express their hope that the VGA price will soon return to the way it was before. The answer is yes, or maybe no, but experts seem to be leaning more towards the first scenario.

As ETH moves from proof of work (PoW) to proof of stake (PoS), GPU mining will quickly become possible. At that point, cryptocurrency miners around the world will have two options. If they want to stay “tied” with Ethereum, they will likely have to liquidate their entire existing GPU and move all funds to ETH 2.0 nodes (called staking and this is how they can earn more). ETH after consolidation).

Currently, the rest of such chains are not profitable and the hash rate is also quite low. It is not clear if, after the merge, any of these chains will be able to assimilate the huge additional hash stream (and maintain profits/costs). It is possible that as the market moves to mining other coins, the total hashrate will increase, the difficulty will increase exponentially but the price will stay the same – reducing profits even further. In such a case, miners will try to find between 10-20% of ETH profits.

This will trigger a sell-off of older GPUs in the market, triggering a price collapse (and also possibly ending a downturn in semiconductor supply as demand in the GPU market will soon return). stabilize in a year or two).

But things may not go so smoothly. Cryptocurrency is an unpredictable market. It is not excluded that as the difficulty of these coins increases (as miners switch to alternative currencies like RVN), the price will also increase accordingly. You can see the current returns of these Altcoins in the table below, and if they can sustain even 60% of this return after consolidation, it will still be a reasonable investment. 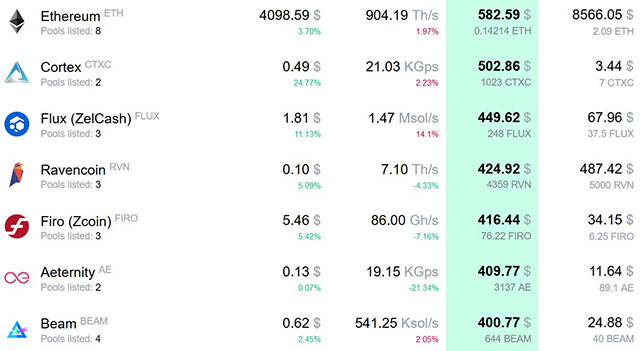 For example, if miners can keep close to 60-70% of Ethereum profits post-merger, it is highly unlikely that they decide to liquidate their rig as most of them are operating at profit margins. very pleasant since the recent ETH price boom in 2021. If this scenario were to happen then crypto GPU mining would “remain here and not go anywhere”.

Gamers are currently gobbling up any high-performance GPU model they can find to upgrade their system, but clearly the opportunity is not for everyone. In short, the shortage of GPU supply will continue for many months to come. However, things are likely to change in a positive direction for the gaming community when ETH 2.0 is released. Let’s wait and see!